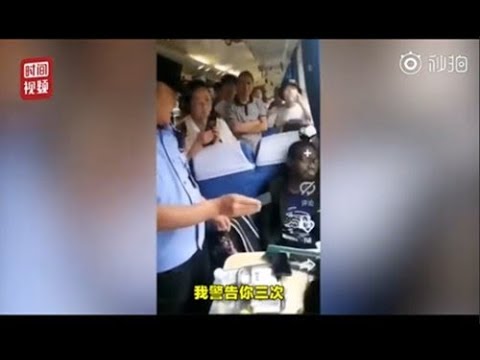 Foreign Student Gets Arrested by Chinese Police, For A Train Seat!

Foreign Student Gets Arrested by Police, For A Train Seat!?

On July 23rd, a video went viral on Chinese media where a foreign student was caught by Chinese police on a train…

According to the video, in the morning of July 21st, on the K377 train from Shanghai to Xining, a foreign student from Ghana, was pulled from his seat and taken away by Chinese police officers.

Before that, one of the police officers was standing next to the student, and showed him a ticket of the actual seat owner.

According to news, the officer gave the student multiple warnings, before pulling him from the seat and handcuffing him, with another officer’s help.

As per the policeman of Central Command Center of Qinghai-Tibet Railway Public Security Bureau, the man stole seats from other passengers and refused to give them back.

“He simply refused to cooperate. His own seat was No. 28, but he took two seats which were No. 38 and No.39. The train staff asked him to show his ticket, but he ignored it. And they asked him to give the seats back, he also gave no response, which was why they called us for help. And then we came to the scene.”, said the officer.

However, according to one insider, his original seat was taken by someone else, and the issue was primarily caused by the language barrier between the foreign student and the police. This was further noted by the insider, that stated the student didn’t reply at all to the police when being questioned about his ticket.

As of now, the case is still under further investigation.